Williams and the Grand Canyon 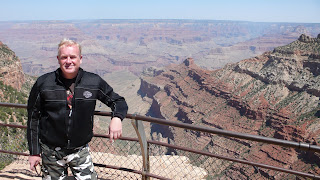 ....i left off going out for dinner. Ga had booked this diner in town. We walked there so we could have a few beers - big mistake it didnt sell beer, although the lady who owned it told us the food was real good - and used fresh eggs and potatoes. So 19 of us sat down in the 1960's neon lit diner and waited .....the suspense was too much so Ian and me went to Rod's Steak house, where i had the special of char grilled sugar coated steak, with a marguerita and a beer chaser - a proper dinner.

Later back at the hotel we all met up and anglo group of English, aussie and Irish had a few more. 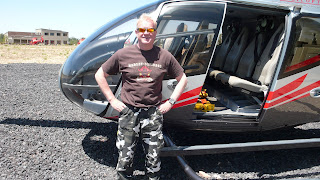 This morning we all rode up about 60 miles to the south rim of the grand Canyon - and its real WOW - quite spectacular, we also took a helicopter trip over, which made me feel quite ill - so after a quick pizza at the appropriately titles restaurant "WE COOK PIZZA AND PASTA", i rode home for a nice afternoon nap - after sorting out Skype to make free calls home.