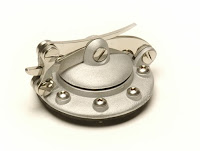 Well the FedEx Man and the Postman, have been busy delivering three sets of stuff to me over the last few weeks, and what with the bits removed from two Streetbob's the garage is really filling up.
So far:
From CPV in Holland - 3 sets of forward controls and 1 set of hand controls (2 more to come in March)
From Chopper Shox in Las Vegas - 3 Ride like a Caddy seat pans and shocks in stainless.
From Crime Scene Choppers in California - 3 Streamline Gas Caps - which I found out about from the excellent Cyril Huze Blog (www.cyrilhuzeblog.com)
From Shaw Harley Davidson - 3 V-Rod Belts.
From CMF Wheel Rims in Devon 3 23' by 3.5" Stainless front rims and 40 spokes - and the same again for the rear but using 23" by 4.25" rims.  I took one set out to Hagon in Essex today to get it laced onto the Harley Hubs cut from the Streetbob.  I am getting another set powder coated black next week and will take them out for lacing after.
Its all coming together nicely.
Posted by iansolley at 17:02 No comments:

Well I didn't realise it, but the Macbeth bike and I actually made it into the February Issue of BSH - only a small photo on the Brightona 2008 Rally - but it all counts. 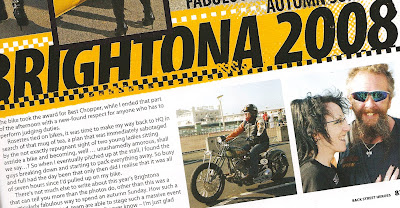 Posted by iansolley at 16:56 No comments: 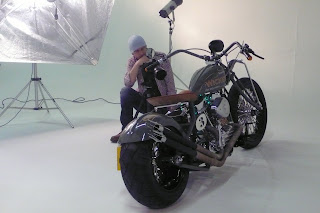 Well I went for a photo shoot up in Battersea today for Back Street Heroes with the Macbeth bike , and it will be the cover and centrefold of the April 2009 Issue.  A nice day with 4 hours in the studio, whilst the photographer took 600 pictures of my bike and a model who gradually disrobed as the day went on.
It was a tough day.
Posted by iansolley at 18:04 No comments: 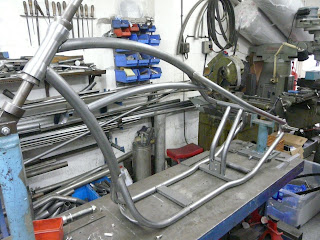 Went over to P&D today to see how the new frame is working out.  Its going to have a visible backbone, with the tank underneath, 35 degree rake  and about 3" stretch.  We will be running 23" wheels front and back and so will have to use a V-Rod drive belt, which really stretches the frame out - this will be one long bike.  Its my design and I am hoping that it will come together well.
The wheel rims arrived today from CMF in Devon, 23" Stainless, running 3.5" wide on the front and 4.25" wide on the rear.  I will be getting them built on the stock Harley hubs from the FXD.  My seat pans also arrived today from Chopper Shox in Las Vegas.
Posted by iansolley at 19:56 No comments: 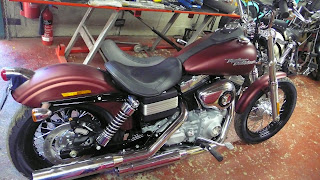 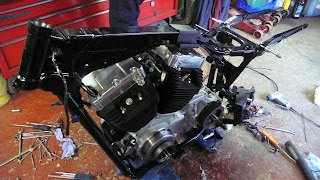 If I was going to start a custom bike business I needed to have a plan - a brand - a product.
Working backwards, I wanted to create a splash at launch, and being honest, building another bike like Macbeth probably wouldn't achieve that - so I decided to build three bikes all at the same time - but variations on a theme.  As far as I know no other bike builder has done a multiple launch.
I love old school, the simplicity and clean lines of a rigid, but I  like modern styling cues, I also wanted reliability and rideability - and the end bikes to be worth a max of 30,000 Euros.  So I bought three brand new 2009 HD Streetbob's to use as a base - its cheaper than the parts and you get through registration a whole lot easier.
I have given them the following working titles:
No.4 - A Bar Hopper (Red)
No.5 - A Cafe Racer (Black)
No.6 - A Bagger (Blue)
On Thursday 6th January we (me and Richard Taylor, who is giving me lessons in bike building as we go) pulled the first one apart - saved what we are going to use and the rest will go on E-Bay.
Oh yes - the Brand - well Lisa came up with the name 7 Ages - its from Shakespeare of course and in so many words sets out that life is a journey of many parts but one that progresses and changes through the seven ages of man - just like a bike ride!  Over the next few months we will refine this initial thought into a brand, with values and an image.
So 7 Ages Custom Motorcycles it is.
Posted by iansolley at 17:52 1 comment:

How it all began 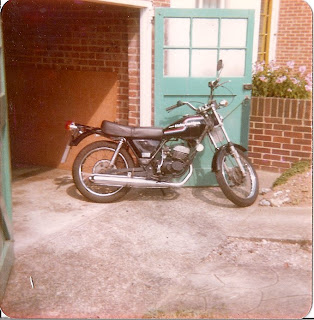 I have been into motorcycles for well over 30 years - my first ever bike at 17 was an AMF Harley Davidson 125cc - a nice single cyclinder bike, that promptly put me in hospital for a couple of months with a fractured spine. But I rode it home from the hospital - much to the annoyance of my mother and kept it for a few years. I have been pretty much brand loyal ever since - maybe its genetic as my grandfather had one after WW1.
I started getting into Harley's seriously again in 1996 when I bough a Sportster -an 883 custom - I had a stage 1 and then bought some chrome bits, before I traded it up for one of the first twin cams a 99 FXD which I still have although, its only the frame and engine that really remain of that original bike - I have gradually customised in a simple add on way over the last 10 years, I still love it and hope to keep it forever.
Afer that a Screaming Eagle 2005 Fat Boy, which I had a 240 rear end and stretched tank put on, and have only just recently swapped for a 2009 Streetglide. Then in 2005 I met Richard Taylor a local bike builder who I got to do some minor work on my faithful FXD - at the time he was working on a new project - the Air Bike - its a superb piece of engineering, with a 360 section rear tyre and a 23'' front wheel, it sits on its frame and rises and lowers by his bespoke air suspension - I bought it and that was really the start of my custom obsession. 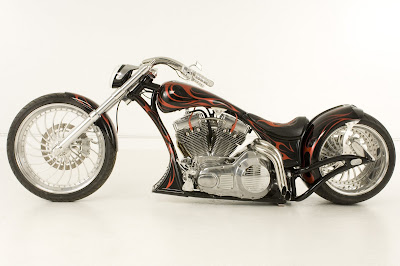 I should also say I love riding and get out and about alot, regular trips to the US, I rode to the south of Spain in 2007, and did Route 66 in 2008 (see my blog on this) - i should add much of this was possible as I gave up work in light of the impending recession in July 2007.
During 2008 i fulfilled a long standing ambition and built my own bike in conjunction with Richard Taylor - the ''Macbeth Bobber" - it took most of the year and was eventually finished in September. All in all I was delighted with the result, but more importantly loved the whole process of the build -  my real contribution was the design and concept - which included most of the parts used, the frame style and the paint finish, and of course some wrenching.
Its called the Macbeth Bobber for my wife Lisa, who had no interest in Motorcycles, but an abiding love of Shakespeare; so to show that despite her view that I did not pay any attention to her interests - I had this bike Shakespeare themed.
Well two part quotes "something wicked this way comes" and "...full of sound and fury". a nice historic Macbeth emblem on the saddle and a 3 (for 3 witches on the oil tank). I am hoping to get it 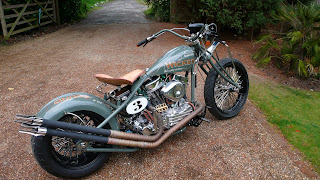 0n the cover of BSH this year and enter it in the London Custom Motorcycle Show in May. 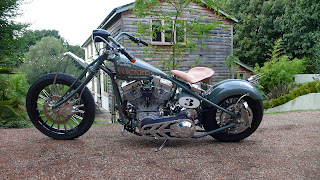 So having finished one bike  - I decided spend a big part of 2009 indulging my obsession with custom motorbikes.
This blog is going to chronicle this year where from a standing start I want to set up a small custom bike business, with a brand, some bikes to sell, a few parts, and of course some T-Shirts. It will involve a lot of time and effort and importantly co-operation from many different people.
I am very excited.
Posted by iansolley at 16:34 1 comment: