ROMEO 80 - Break Down for Paint

Its been a long time coming but my 1982 R80 is now ready for breakdown for Paint, Powder, Polishing and Cleaning.  I suspect this will take about a month and then another month to put it back together again - so hopefully on the road by the end of August 2012. 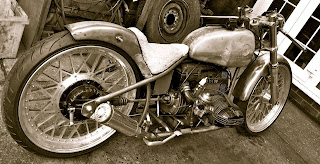 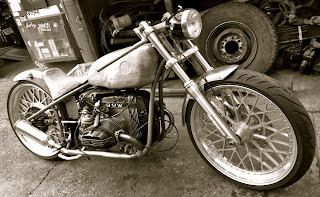 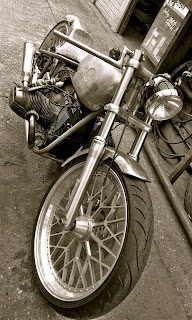 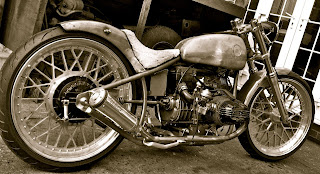 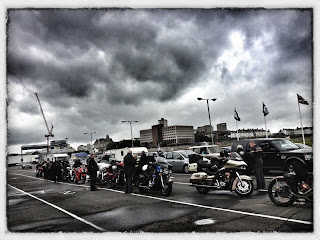 Just back from an eventful trip to the Harley Davidson Euro Rally in Cascais, Portugal. Originally the plan was to go with three other friends, all riding customs and go there and back via the Portsmouth Bilbao ferry, but circumstances changed and plans had to be altered.

So last Sunday 10th June I got up early and rode 280 miles in the rain on my Othello Tracker to Plymouth to get the ferry to Santander and planned to meet two of them (Gary France on his amazing stretch chopper and his son Charlie on his Sportster) two days later in Penafiel in Portugal.  Getting to Plymouth was not pleasant with no front fender and cold rain the whole way, 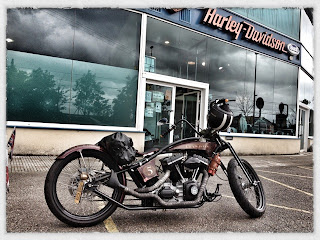 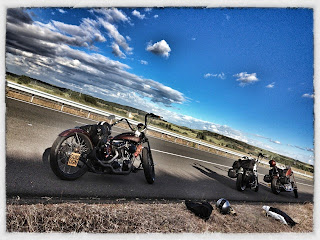 but when I got there it was well worth it - the ferry had 200 Harleys on it for the crossing, and I hit the bar at 4:00pm before we had left port, and stayed there until 2:00am making many new friends.  We were due to arrive the next day about 12:15 and were only a bit late, when I got a text from Gary saying his bike had been hit by a the gear shift from Charlie's bike and it was being transported to Santander Harley Davidson for repairs, so I agreed to meet them there for half past one - by this time there was thunder and lightning and of course siesta time which meant they wouldn't open until 3:00pm - but all credit to them they fixed both bikes and we were on the road to Leon by six that night.


However the bad luck was not over and about 8:30pm that night the chain on Charlie's bike a 1987 Sportster broke and got wedged inside.  Gary managed to get a recovery vehicle out who took us to Palencia by 11:00pm and found us a 2* Hostel in the middle of an industrial estate where he assured us a mechanic would come and fix the bike at 10:00am the next day.  Fortunately Danny the mechanic did turn up and after running around a bit got a new chain and at last we were back on the road and able to make our scheduled stop in Penafiel of Tuesday night - although somehow I managed to lose my wallet with all my money and cards out of my pocket on the road. 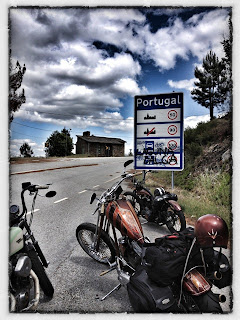 So Wednesday we set out full of optimism for the ride into Portugal and the coast at Figuera de Foz - and this was one of the best rides of the trip, over the river Douras and the wine regions and up into the mountains, before a nice ride to the coast - and the sun was out and it was warm - this is what riding is all about. 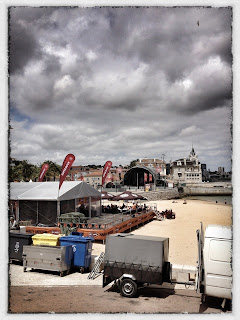 Thursday morning when we got up for the final 150 miles into Cascais the weather was not so good fine rain and wet conditions, and within a mile of leaving the hotel I lost my back end on a slippery zebra crossing and slid down the road.  I had a few bruises, but both brake controls were damaged and my handlebars bent and cracked.  Despite this I decided to get the bike going and get to Cascais about lunchtime ready for some well earned beers.

As ever HD have done well with the resort, Cascais is a affluent seaside town and the whole marina and seafront was secured for bikes only with all the bars and restaurants geting involved to provide a brilliant party atmosphere for the next three days.  We had a great hotel the Farol Design Hotel just on the cliff above and it was a superb base for the whole weekend.

The main plan for Friday was the Custom Bike Show and reluctantly I entered as in the past I have come nowhere and as much as I love my bikes they are not out and out show bikes but built for value and usability.  The competition was held at the Casino in Estoril and amazingly all three of us won a prize, with maybe quite a bit to do with the fact we rode them there.  I won Best Custom, Gary got the Peoples Choice award and Charlie won Best Sportster.  Although I am not a fan of these competitions mainly as they are so subjective, it was a real buzz after all out incidents for us all to win and certainly put a smile on our faces. 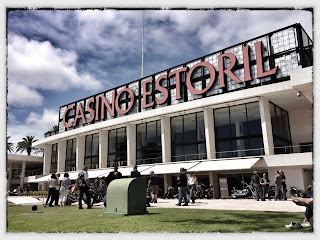 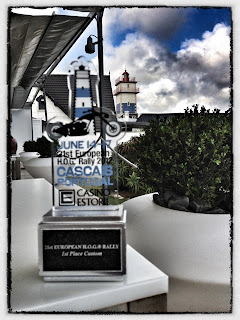 As my bike was damaged I was fortunate enough to be able to call on the services of We Move Bikes to get it shipped home, but I still had plenty of time to pose around the resort on it over the weekend.  Gary and Charlie rode back the hard way - I did 1100 miles overall and I suspect when they get back it will be about double that - congratulations to both of them.  But the point was proved these bikes are there to be ridden and not trailered to shows. 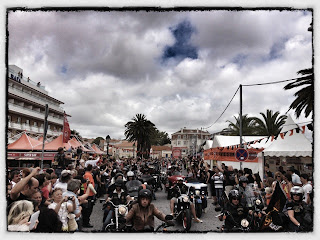 ....and here is the bike show on Portuguese TV., with the nice lady standing in front of Charlies Sportster

This years big Euro Rally is in Cascais in Portugal, and like last year in Biograd, they have secured the whole town as a bike only environment.  Cascais is an upmarket resort with a clutch of 5* hotels and a gorgeous seafront. 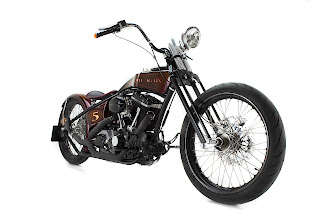 I am taking a shortcut this year and getting the ferry from Plymouth to Santander and then riding a scenic 1000 miles to get to Cascais, meeting up with some mates half way.  I am riding my Othello bike - hardtail - 23" wheels  - limited range - so it should be fun.  Will update as I go on, but here is the HD preview video:

Posted by iansolley at 23:51 No comments: