Is this the way to Amarillo.... 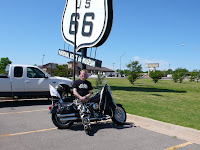 We arrived in Weatherford Oklahoma last night and "Ga", had arranged one of his special meals at Nita's Ice House - this is as usual a box on a retail park divided into two parts a full on bar with a pool table and a restaurant that looks like a childrens room in a 1970's pub.

I left with Ian and Steve and against my better judgement went to the mexican opposite - even though i have NEVER had a good mexican meal - and i wasnt disappointed....gross. but at least i got to bed at 9:30 for a good nights sleep - apart from the massive thunder storm at 2:am.
Today we were riding 200 miles across the farmlands of oklahoma and Texas to Amarillo. i have to say that the feeling of getting on your bike first thing and riding off on this road trip is fantastic, the sun was out and it was soon really hot.

The mornings highlight was stopping at an old bit of Route 66 that is no longer used - so we could drag our bikes up it to see who could hit a 100mph...i think Adam said he hit 95 which is good for a crap surface.

I saw two good Christian bumper stickers today....."My Boss is a Jewish carpenter" and "Body piercing saved my life" (with cute pic of Jesus on his cross).

After that was "Ga's" next surprise, we went to Erike Oklahoma, self styled Redneck capital of the world. (I wont describe it but watch the movie clip).

Erike is one of those towns and we have seen loads that used to thrive off Route 66, but when the Interstate opened up - they just died and have been left to rust away - leaving a sad but interesting landscape.

I am now in The Big Texan Steak Ranch and Motel, where we have a top cowboy night ahead - and they have a 72oz Steak - which is free if you eat it......i might just have a go.

Yes, that's the man who offered me sex when you handed him the phone. Thank you for sharing your new friends with me.