With the three new bikes, I always planned to build a Cafe Racer, and so Bike No. 6 is going to be it. As you know I bought three brand new 2009 FXD Streetbob's for this, but recently I had a change of plan and swapped my last unused FXD for Buell Ulysses and a nice cheque with my friends at Shaw Harley Davidson - I had always wanted a Ulysses and it was a great deal.

So instead I am going to re-incarnate my old 99Dyna (again) into the new cafe racer. 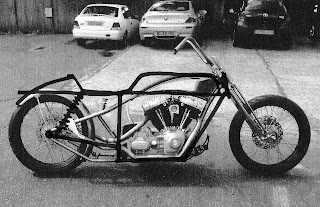 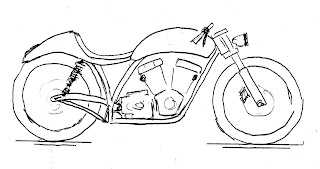 So far the design process is very basic and the two attached pictures show how I sketch over the rolling chassis of the last bike to get a feel for a cafe racer look. The next sketch then shows how it could look. Design is often about constraints - the main one is the 23" wheel - the only drive belt I could get on BIkes 4&5 was a V-Rod one and so that pushed the wheel back for the long look. On this new bike I am going for a chain drive so I can bring the wheelbase right in.
Finally to keep me focused I bought this advert on EBay (£3.45) from 1977, for a XCLR1000 for some styling cues. 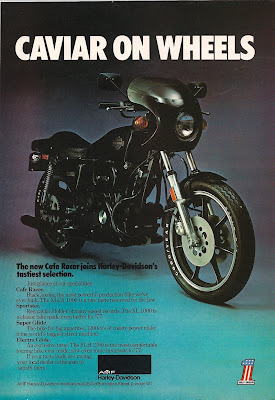 Expect completion during Spring 2010 - its going to be white and have Harley Racing stripes and of course an appropriate Shakespeare quote.
Posted by iansolley at 10:53 3 comments:

Its been a good week for PR as I have now bee featured in Cyril Huze's excellent Blog - I think its ranked No 1 in the world for custom motorcycles. A great post, but we mixed our Shakespeare up and ended up calling the bike Othello not Hamlet, but there you go - Bike No. 5 The real Othello one will be ready in a month or so, and we can get that addressed then - I should have stuck to just using numbers! 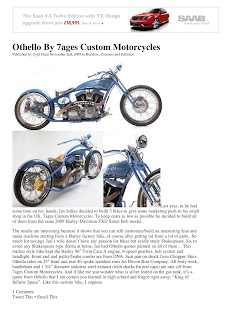 Posted by iansolley at 19:15 No comments: