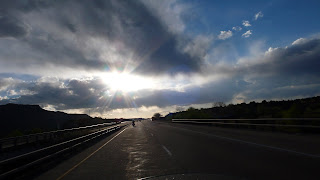 i had a modest 20oz steak in amarillo, Chris went for the monster and failed although some young canadian ate all 72oz, plus starter, salad and side dishes....

there was a massive storm last night and it was still chucking it down this morning, which delayed our departure by an hour - still off we went to Amarillo Harley davidson to get more T shirts, then off to Cadillac Ranch where some farmer stuck 10 caddy's in the ground and people have graffiitteed on them ever since......that was my all time worst tourist attraction.

the weather got a bit better but still threatening thunder as we set off for santa fe, and then disaster struck as the French (david adn christelle) came off at 55mph, most of us were way ahead and missed it all, but had to stop while Ga went and sorted it with the police and ambulance. They were OK but the bike was a write off and their leathers and helmets ruined.

In the past week we have become a pretty good group and this was a very sobering time for us all- on what was proving to be an excellent trip.

eventually we got going again after spending 3 hours at the cafe at mid-point (1139 miles from Chicago and LA) - the French have given upon bikes and decided to finish the trip off in the support van which is a shame but understandable,

the afternoon started to brighten up as we hit New Mexico and the sun shone and the wind blew as we raced across the high plains to do 200 miles in about 4 hours to get to santa fe, by the early evening, which is a gorgeous town - it could be europe, with boutiques, museums, and galleries, a town sq and winding streets.

Against my better judgement we had a mexican meal - and it was superb!

tomorrow - its a free day, although i and a few others plan to go shotting.457 magnums with Ga.
Posted by iansolley at 07:06