We set off this morning at 9;30 my new group of seven including myself....they are the three Americans from Vermont, and my three friends from Tunbridge Wells who i have know for some six years - we met through school where we all have a child of the same age. This resulted in a club called the First Friday Chaper as we all meet for a beer on the first Friday of each month - we also have an annual ski trip - and now an annual bike trip (well for me and Iain its our fourth).


Anyway te americans are from left to right: 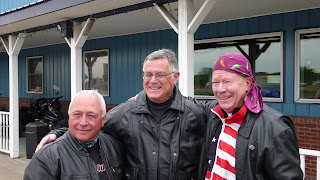 Roger, who is a mortgage broker and rides a nice dyna wide glide, he has been friends with Al since junior school.

Guy - owns two restaurants in manchester Vermont and is a mad Harley man doing 100'000's miles on his Harley - he is the tour guide, and rides a fully customised softail.

The TW group are as follows fro Left to right: 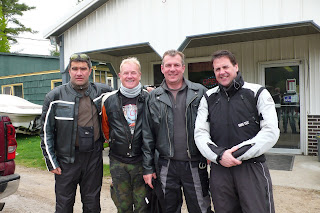 Iain ; is a lawyer who does real estate finance so we have some work stuff in common although not much as neither of us works that much - but at least he has a job - he has a Ducati at home - but really wants a Harley but cant swallow his pride and get one.

Me: enough about me.

Paul: is a local TW guy and dabbles in property and runs a car bodyshop business - he will buy a harley aftre this trip - as i can tell he soooo wants one.

Tim: works at Credit Suisse and surprised us at Christmas by saying he would pass his test and come on this trip - he did and Paul lost £100. He has a sportster, but i bet will buy a bigger bike before year end.

Anyway we all set off today, through Vermont and into New York State (how many states is that for me this trip so far?) and its so picturesque - we are mainly in the Adirondak National park, which is full of rivers, and lakes and mountains - superb.

The roads are great with more hills and bends than the whole of Route 66, its a real joy. We are out for dinner tonight and then tomorrow we head upto Canada and follow the border along.