Riding Hamlet in South of France

One of the points nearly always made to me when I meet other bikers when I am on a custom, is that its all SHOW and no GO.  To prove a point last year I rode Macbeth to St Tropez for the Harley Euro Festival and it happily went some 1200 miles - and surprised me at how usable it was.  This year I had Hamlet shipped down there  - mainly as I was going down with 9 other guys on Harleys with big fuel tanks, and Hamlet is to be sold and I wanted to keep the mileage down - but still did around 300 miles. 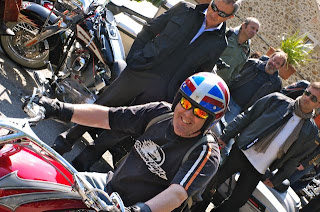 One of the highlights of the trip was a rideout with Chelsea and Fulham HOG, of around 60 miles around the hills and coast of St Tropez.  The film was made by my friend Gary France (see above photo) with two Go-Pro cameras mounted to the front and back of his brilliant custom Tailwinds.  Later this year Gary is going on a huge solo tour of the USA -so follow his blog www.garysusatour.blogspot.com

From where I was riding, it looked liked Hamlet rode and handles really well. You should get a really good price when you sell it and it will become somebodies pride and joy.