My partner in 7Ages is called Richard Taylor, who has been building bikes for years and is a genius engineer (he is my Mentor!) - he first came to fame in 1995 with the Blower Bike which featured on Top Gear, Big Breakfast, numerous magazines and show awards too.  In a bizarre quirk of fate this bike which he sold in 1995 has come back home, having completed about 700 miles all in - although the original Harman engine has gone.
The bike is registered as a 1971 Harley (so no TAX) and is a complete hand built beauty which has TWO superchargers, one for each cylinder, and when working is the nearest thing to a road going rocket on two wheels you could find - it needs a new engine and a restoration and styling to bring it into the 21st Century - and I am tempted - but anyway here are some pictures to show you what its like.  I would also add that when started up with the 2 blowers feeding a 120 cubic inch engine its going to sound like the Starship Enterprise. 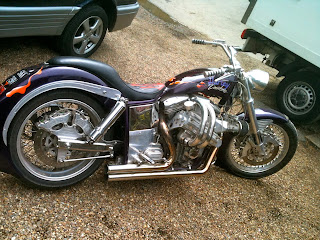 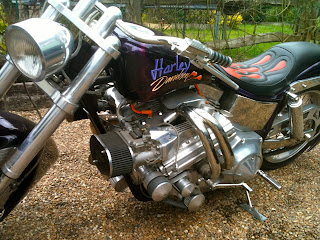 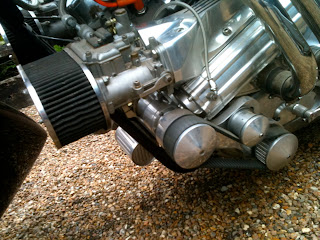 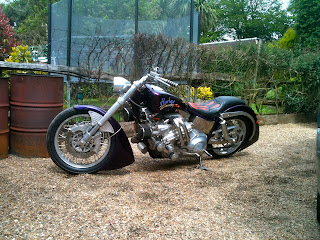 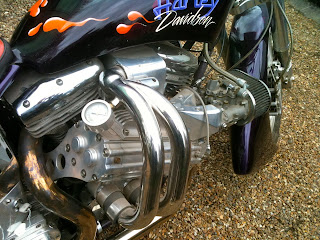 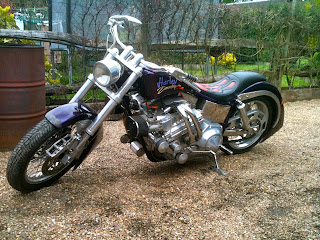 Hmmm. Not sure about this one. Once you have restored it would you be happy with it? OK, it has some very unusual features and it would be cool to restore it with Richard, but would you ride it? Would you completely update it with new features and a new paint job, new brakes etc?

- I will keep the frame and superchargers - new tank, fenders, wheels, brakes and paint.

Will I ride it - probably for the odd ride out - and drag race!