The end of the road 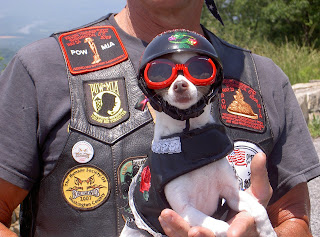 Well all good things have to come to an end some time and today was the final day of our tour. And what a day it was - the 105 miles of the Skyline Drive in glorious sunshine (as opposed to the thick fog of the previous attempt). Some of the most stunning scenery you could wish for and all viewed from the seat of a Harley - this is what these great clunking lumps of steel are made for - cruising through the long and winding roads of the US with your buddies.
We have met some great folk along the way, but the couple that we bumped into at one of the viewing points on the Skyline Drive were the best - the elderly bikes had brought their small chihuahua (Gabrielle) out for a ride, complete with doggy crash helmet and goggles! What a pair  of nutters - they had been at a Veterans' ride out at the weekend and taken their other dog with them dressed up as General Patten. Don't you just love the Americans?!
The end of the Skyline Drive also spelt the end of the ride and the parting of the ways as Al headed off to see his family in Virginia, Roger and Paul headed back up towards Vermont, Brian headed off back to New Jersey and Tim, Ian and I headed for Dulles airport (where as luck would have it, a complimentary upgrade awaited us - result!). There was hardly a dry eye in the house as hugs were dispensed, backs were slapped and the magnificent seven went their separate ways.

It was left to Al to have the final word (funny that...!) Or two words, to be precise.

Because Nova Scotia juts out into the Atlantic, it is prone to tropical storms and hurricanes in the summer and autumn. There have been 33 such storms, including 12 hurricanes, since records were kept in 1871—about once every four years. The last hurricane was category-one Hurricane Kyle in September 2008, and the last tropical storm was Tropical Storm Noel in 2007 (downgraded from Hurricane Noel by the time the storm reached Nova Scotia).

I hope you've got photos of Gabrielle