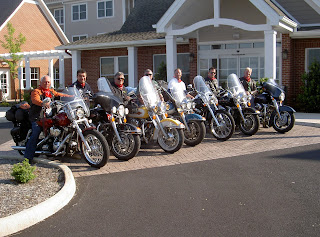 A few thick heads this morning after last night's farewell dinner. To continue the surreal theme of the trip we ate in an Outback Steakhouse (Aussie themed restaurant in the middle of Virginia) and watched the basketball play offs between LA and Orlando on the TV.

Paul had his last martini of the trip. And it tasted so good that he had another. And another. And another, before falling asleep next to the authentic gas powered coal effect campfire in the hotel courtyard. Paul is a martini connoisseur and has educated several barmen along the road on how to mix a perfect martini. Paul is a realtor (trans. Estate Agent) from Vermont and good buddy of Roger's and a really nice bloke. He rides a Road King and has the most waterproof waterproofs of us all (Ian - in that subtle way of his - asked him if he was planning on going on a fishing trip when he first put them on on the first day). 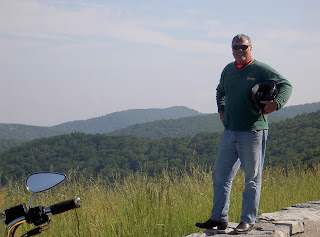 Earlier, Ian was proud of the fact that he had correctly identified the hotel receptionist's accent as being from Virginia on the basis that she sounded like Agent Starling from Silence of the Lambs (here's a clue, Ian - we are in Virginia). He was disappointed that Pam (said receptionist) was unable to place his accent as being from Ramsgate, but perhaps one day Jodie Foster will do a movie where she has to learn how to speak like Ian!

Right - time to saddle up and ship 'em out.

Wrap up and SWOT analysis to follow later today......
Posted by iansolley at 13:14

Looks like you have all had a great time. Glad it eventually stopped raining for you.

Sorry to have missed your trip. Maybe I can join up next year. Guy in Manchster, Vermont