I have to say I am a real sceptic when it comes to Custom Bike Shows, the judging criteria is always so subjective, and personal interests and contacts always seem to play a part.  Which is why after entering a Custom Bike Show in London last year when a bizarre collection of bikes got prizes (but not me...ahhh)  I vowed never again would I enter a competition - its a lot of effort for not a lot of return.

However last month I made an exception and entered an online Bike Competition organised by the excellent Choppertown Nation mainly as the only effort involved was an email, and also the competition is really for small builders you dont get dealer customs or the real high end one off masterpieces - its for custom bikes that are built to be ridden.

So it was a real treat and a surprise to find out I won first place for my Caesar Racer VI in the Cafe Racer division - I am particularly proud of this bike as I have owned it since new some 13 years ago and re-invented it a few times before the current version - and its a daily ride, that I love to get out and blast about on.  The judging was carried out by 10 independent people using the BORDA system whatever that is.  Anyway much appreciated and thanks; a little bit of recognition is always nice.  Someone made a point that I only won as my bike was a Harley  - which I hope isn't true - and maybe we will see next year when I put in my BMW Romeo 80.  Anyway check out all the great other bikes, and congratulations to them.

Finally to show the bike does get used I loaned it to my good friend Preben from Denmark last year when we rode down to the South West of England, and he put about 800 miles on it. 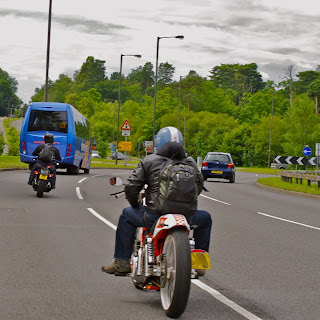 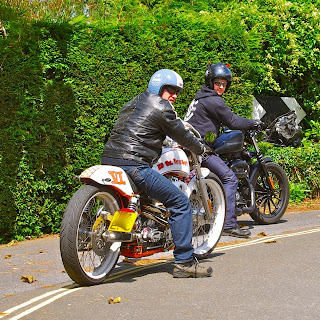