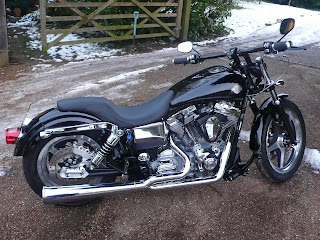 As I have said before, I bought my first Dyna in 1999, and used it to commute to London and back when I had my own property consultancy - I used to do about 400 miles a week rain or shine - and the last thing I wanted to do at weekends was have fun on my Harley.  After a few years I realised the train was best bet (economically and for my sanity) and went back to weekend fun rides and summer commuting.  This allowed me to take stock of the bike and over a number of years change it into "my bike".  What you see now, is a different colour, with a new tank, wheels, exhausts, bars, brakes, as well as raked forks and a tuned engine - I have probably spent more on it, than the original cost - but thats half the point.
Its partly due to my fondness for this bike that I decided to use a stock Street Bob as the base for the three new bikes, but also for sound commercial reasons which I will no doubt expound upon in the future.  But for now the key points are:
The last one of the three Street Bob's arrived today, and when I look at the stock bike, its OK, but not great. 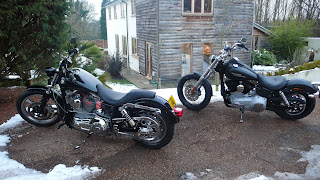 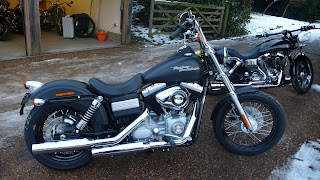 I certainly prefer the styling on my 10 year old model - and this just emphasises why people customise Harley's - when the project is finished the new bikes will be unrecognisable from the Street Bob - and they will need to be to command about three times the price.
Posted by iansolley at 17:38