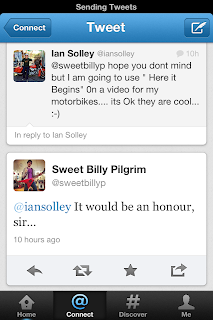 Last Sunday we made a video down at Dungeness - really just a cross between an art film, a bit of fun, and a chance to show the bikes.  I had a soundtrack in mind by a recent favourite band Sweet Billy Pilgrim - and by the wonders of Twitter they let me use it.
Over the last few years I have taken a lot of "road videos" just sticking a camera on the bike and letting the scenery do the talking  with the aid of a soundtrack.  But as with my photography making better films is becoming much more interesting - although its a lot more effort.
The soundtrack of this song "Here it begins" is effectively a score by Sweet Billy Pilgrim of a monologue by Mandy Patinkin from the film "Music of Chance".
Anyway here is the film  - filmed, directed starring and edited by Paul Leeson..... - watch it in full HD!