I went to the very first HD Euro Festival in 2006 and rode down my 2005 CVO Fat Boy - at just over £20,000 it was the ultimate factory custom bike, and I loved the feeling of riding such a unique and splendid bike......and then I got there and parked it up next to another 2 identical ones....it was that moment that made me realise I needed to build my own bike - here is a picture of it. 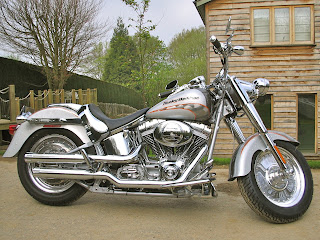 The next time I went was in 2009 and this time I was on my own bike Macbeth Bobber, a hardtail Panhead, a great trip despite a fuel tank range of only 60 miles which meant I stopped at every service station on the way down - but the weather was great and the Warrs boys were all there and we had a top time.  I am not sure who took this picture below of me - but I found it on Flickr. 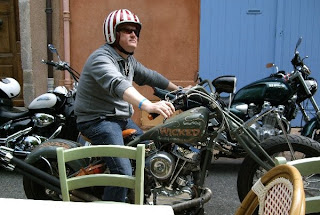 In 2010 we rode down in a group with Chelsea & Fulham HOG - it rained the whole way for 3 days and was cold when we were there and rained all the way back  - I was just glad to be on my Streetglide.  For a bit of a pose I had the Hamlet Tracker shipped down - but as the old Harley saying goes, "Its the journey not the destination". 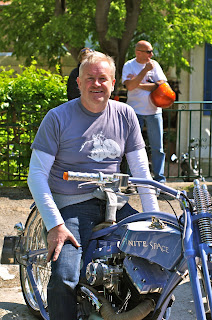 I missed last year, but I am now getting quite excited about going next week on May 8th.  I am going with three friends and will be taking my Caesar Racer, and sharing the riding with my mate Preben on the Streetglide - which will be laden up with our luggage.  This year we are going a different route, via Paris, Bourges, then down to the coast at Montpellier and along past Marseilles.  Here are the three of them on our run to Devon last year. 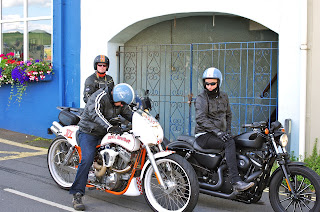 We are meeting our mate Gary France down there who will be on his new super custom, which I am very excited to see - so next post will be a France update.....or if you cant wait follow me on Twitter @iansolley

Caesar will get a lot of attention in St Tropez! It is a very unusual head-turning bike. I hadn't heard the CVO Fatboy story before about parking next to two others and I now see why you started on your custom bike building quest!

I too am looking forward to St Tropez rally, let's hope for better weather than 2010.....